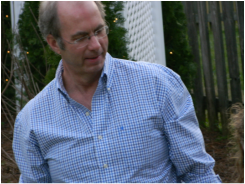 David Scott Carrig was born in 1955, in Cambridge Massachusetts.
He lived in Watertown, Massachusetts until his early twenties, when he moved to the Charlotte, North Carolina area.

He attended a local Episcopal church when he was young.

He has very fond memories of the ministry of that church, their kindness towards everyone, and especially the glow-in-the-dark manger scenes they gave kids at Christmas.

The pastor's expression of love, kindness and peaceful attitude is what he remembers and cherishes the most.

Before becoming a teenager, David no longer attended church.
Yet one day, In his mid-teens, he opened a 'red-lettered' edition Bible he had received when he was attending church.

He read Jesus' own spoken words, those highlighted in red, and was totally awe-struck by how powerful, direct and on purpose Jesus spoke.

Jesus' words significantly impacted David in that moment, far beyond anything he imagined possible.

They were powerful to him deep inside, unlike anything he had ever read or heard prior.

He was later baptized in the Holy Spirit, which he says greatly increased his discernment and understanding of the spiritual truths he was reading and hearing.

David is often prompted by the Lord to write down the messages of truth He reveals, both for his benefit and for the benefit of others.

David hopes that this website will be of value to your own spiritual growth, ever increasing your understanding of our Creator, the living, true God who is love.